It is no wonder that Third Street South was chosen by the original settlers.  Bordered on the west by the beaches of the Gulf of Mexico, on the East by Naples Bay and Crayton Cove, and on the South by the 10,000 Islands, Third Street South is the heart of Old Naples.  The story of its birth is one of economic adventure, glamorous people, and colorful characters from its beginnings to the present day.

General John S. Williams and Mr. Walter N. Haldeman sailed through Gordon Pass into a beautiful expanse of water which General Williams is credited with naming, along with the town to be, after the Bay of Naples in Italy.  Heading a group of families from Kentucky and Ohio, the two men formed the Naples Town Improvement Company in 1886.

As access was only by water, the Naples Pier was constructed in 1889, as was the magnificent wood frame Naples Hotel with its long porch facing the sea.  Some of the original cottages of Old Naples, including Palm Cottage, now the home of The Naples Historical Society, were built around it.  A shell road was completed between Naples and Fort Myers in 1918.  By 1919, the Mercantile Building, which still anchors Swan Court and now houses Campiello’s Restaurant, had become The Seminole Market with the Western Union Office upstairs.  By the 1920s, the Tamiami Trail (U.S. 41) connecting Miami, Naples, and Tampa was completed and opened the West Coast.  Over the years, The Naples Hotel became well known and visited by numerous celebrities including Gary Cooper, Daphne du Maurier (the author of Rebecca and other novels), Thomas Edison, and many more. 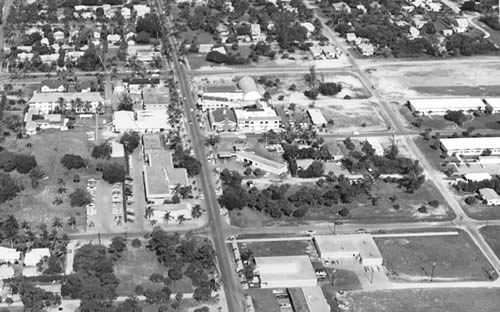 After World War II, the graceful growth of Third Street South began under the influence of businessman and philanthropist Junkie Fleischmann and his wife, Dorette.  Charmed by an area where black tie was not the norm every night, their first purchase was The Mercantile Building, which they transformed into a shop called The Antique Addict and filled with porcelains and furniture collected on their worldwide travels, most of which were connected to assignments for the U.S. government.  The next project was the now entirely renovated building where Sea Salt has opened, but for over 50 years it was the home of Mark, Fore, and Strike which the Fleischmanns knew from Chatham, Massachusetts where they had a summer house.  They added the current Tommy Bahama building for a New York decorator, Greenwich House, whom they encouraged to come, as they did Gattle’s.  In addition to a myriad of business and governmental pursuits, their interests included producing plays on Broadway, publishing, the Metropolitan Opera, the Ballet Russe de Monte Carlo, collecting, music and other arts.  As a result, Naples again saw well known faces among their houseguests.  Among them were Hedy Lamar, Gertrude Lawrence and Richard Aldrich, George Montgomery and Lawrence Tibbet who, with his wife Jane, lived in a house nearby.  There were many others, and the word of mouth about the attractively glamorous life in Naples spread.

Simultaneously, Junkie and Dorette Fleischmann created Caribbean Gardens.  To the entirely overrun and depleted acres that had belonged to Henry Nehrling, they added much more land, created habitats, peaceful winding pathways, an inspiring Orchid Cathedral, and serene lakes.  They imported hundreds of exotic plants, birds, and unlikely animals so that Caribbean Gardens became both a research center and an eco-tourist destination – before that phrase was invented.  The Easter Sunrise services held in Caribbean Garden were ecumenical and became a community tradition.  Artists were commissioned to paint the birds, flowers and fauna, and limited editions prints were made in The Netherlands from the original paintings, some of which are now in museums. On the lighter side, The Duck Vaudeville, an extraordinary show starring Daisy, the Piano-Playing Duck performed on The Ed Sullivan Show and travelled to Paris to perform with Leslie Caron.  After Junkie Fleischmann’s untimely death in 1968, the location was leased to Jungle Larry’s Safari Land, owned by Larry and Jane Tetzlaff, and is now The Naples Zoo.  The Tetzlaff family has been strong advocates of conservation and animal care since they arrived. 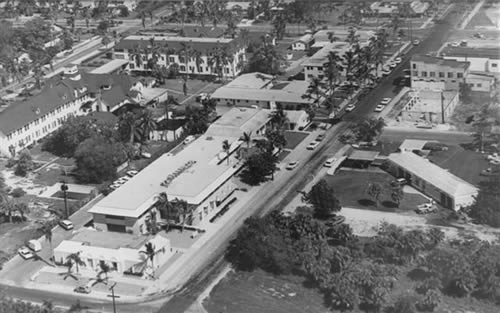 Ultimately, Junkie and Dorette Fleischmann built more buildings on Third Street, often helping to start galleries and other small businesses which helped create the community of Old Naples.  His widow continued their vision after her husband’s death, and their daughter continues it today.  Others built as well, contributing greatly to the area, and shop owners filled the stores with the attractive clothes, decorations, antiques, art and the other earthly delights that have always drawn people to shop and dine on Third Street South.

Restaurants came, starting with Tony Ridgway whose Ridgway Bar and Grill is in the same location as his first restaurant on Third Street, Chef’s Garden, was over thirty years ago. Now, the many restaurants, cafes, bistros, and pubs are all recognized, including nationally, for excellent food and superb wines, and provide endless pleasure.

Today, Third Street South, the Birthplace of Old Naples, is on the National Register of Historic Places, and nearly uniquely among resorts in the United States has retained many of the original structures.  Most importantly, the grace and charm that brought the first settlers here continues to draw their descendants and all the others who have since found this unforgettable place.  The glamour and good times continue.

Third Street South with the Gulf beaches on the West and the Bay of Naples on the East is in the heart of Old Naples. Crayton Cove, The Naples Pier, all the old renovated original cottages, Aqualane Shores, Port Royal, and all the magnificent houses on Gordon Drive south to Gordon Pass and across the pass to Keewaydin make up the jewel in the crown of Naples. We list some of the things for you to see.

Please see the listings below, scroll through The Directory, or consult The Third Street Concierge.  Find Whatever Is On Your Mind.

The oldest house in Naples (1895) and listed as a landmark in the National Register for Historic Places, Palm Cottage™ docent-guided tours of the 3,500 square foot house-turned museum present an exemplary overview of Naples history and heritage.  Opened in February 2010 is the new Cottage Theater, a limited 16-seat venue where visitors can relax after a tour and enjoy “Naples Oral Histories”, a filmed series of first-hand accounts of Naples’ past.  Adjacent to the museum is The Norris Gardens at Palm Cottage, also owned and operated by the Society.  The Gardens chronicle Naples landscape history over the last 100 years.  Naples Historical Society, a 501c3 nonprofit organization, also offers a speaker’s program, Talk of the Town!, and a widely-embraced children’s educational program, Pupils at Palm Cottage for Collier County elementary students.  Visit www.NaplesHistoricalSociety.org or call 239-261-8164 to learn more or to book a tour. 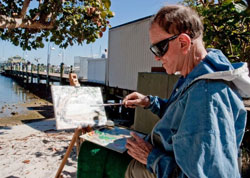 Four blocks east of Third Street South is Crayton Cove centered on The City Docks, which have served fishermen and yachtsmen since the turn of the century. Crayton Cove is full of character, with some funky shops and some that are more traditional. The Dock, a relaxed seaside restaurant has been a favorite for decades. Shop for clothes, flowers, decorations, sports gear, and food. Walk the docks, charter a boat for fishing in the inland waters, or on The Gulf – sail, cruise, take a picnic.  Smell the salty air, watch the boats of all sizes come and go…let your imagination drift.  www.discovercraytoncove.com 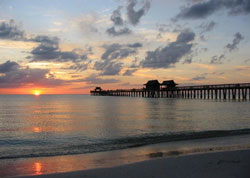 Built in 1888 and just two blocks from Third Street South, The Naples Pier extends far out into The Gulf of Mexico. It was the access point for all travelers to Naples, which was only possible by boat until 1918, when the first shell road from Fort Myers to Naples was completed. It is a perfect place for fishing, for strolling, for talking, for watching people on the beach, for following the birds circling the fish out in the Gulf…or for peacefully contemplating the horizon. 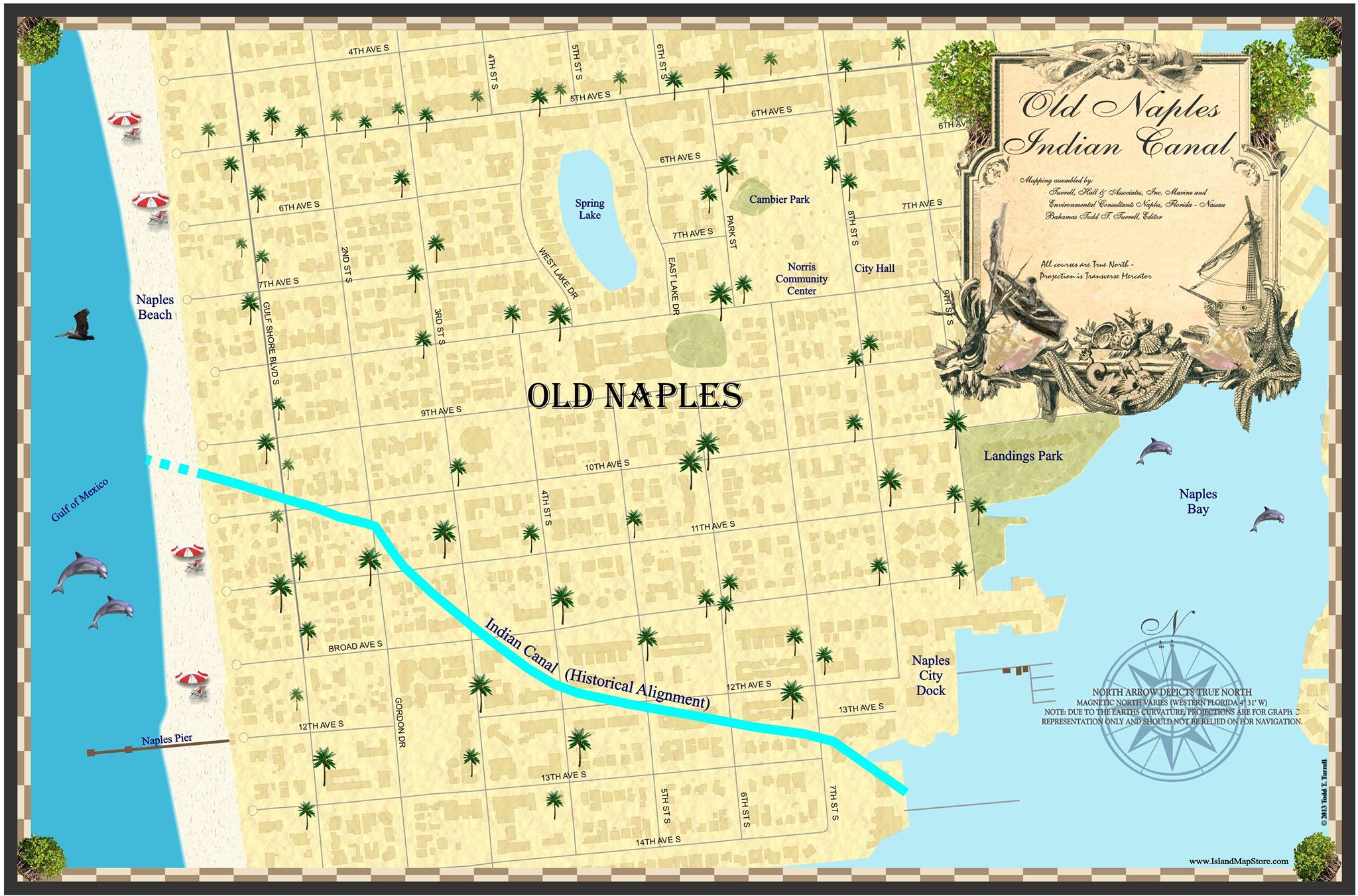 Naples Backyard History’s mini-museum on Third Street South displays the history of Naples as remembered by those people who with their ancestors and families either created or witnessed much of it. Gathering memories before they disappear gives shape and color to the development of one of the nation’s most attractive towns. In addition, Naples Backyard History takes its work and its philosophy to schools to show children how each person is an integral part of their community. Through speakers and other programs such as Naples History Month each May, Naples Backyard History seeks to build an extraordinary archive. Founded by Laverne Norris Gaynor, whose family has been in Naples for generations, Naples Backyard History is a dynamic museum that provides integrated insights and welcomes your visit and participation. 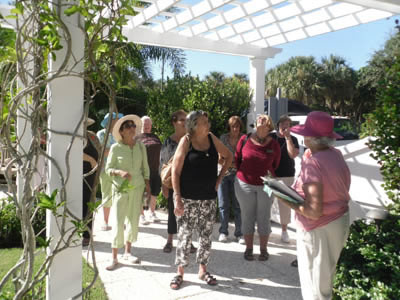 Please see the listing for The Naples Historical Society which explains the docent-led tours they conduct of the historic Third Street South area.